I wrote this article for the NERC CENTA blog and also the Signy Reunion magazine - here for the 3rd time now in print I present to you a tale of woe....with a twist!

A long time ago, all the way back into the 1960’s, a new experiment took place throughout the Antarctic region. Taking plants from one latitude and moving them to another seemed a harmless but effective way of testing their physiological resistance to the harsh wilds of the Antarctic back then. But, little did we know…

One such plant found itself uprooted from its home on South Georgia in the Sub-Antarctic and relocated just a few steps from the research base on Signy Island 6º further south in the Maritime Antarctic. It did not survive long with the grey days and relentless winds of Signy, and soon perished. However, its stowaways did not. Hidden amongst the soil surrounding the roots were the small worm Christensenidrilus blocki and larvae of the flightless midge, Eretmoptera murphyi. Both are native to South Georgia, neither are native to Signy. In fact, Signy Island has very little invertebrate life to write home about at all. Some small mites and springtails are all it has known since before the last ice age. No native ‘macro- invertebrates’ live there, and the introduction of E. murphyi has given it is first. In fact, the alien flightless midge is now the largest terrestrial organism on the island.

This midge settled in well, and over the decades has drastically expanded its range from the base to an area close to 85,000m2, stretching up across the hillside behind the base, and at the top of the valley path leading away from the cove where the research station is located, meaning it will soon enter new valley systems. It can be found at densities of as many as 100,000 midges per m2 and shows no signs of slowing its spread. Signy Island is under a full-scale invasion. 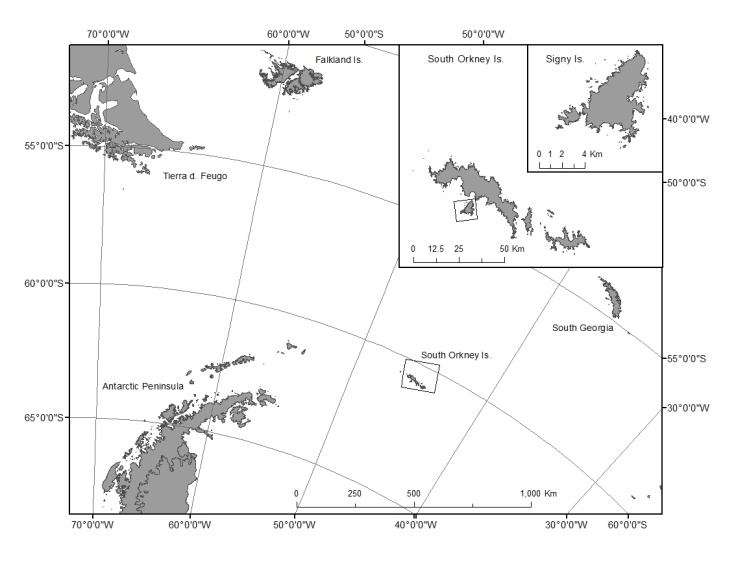 Eretmoptera murphyi is unusual for a polar invertebrate, in that it is asexual, with females able to produce clones of themselves. Without the need to find a mate, the midge does not need to time when it emerges in the summer. Essentially, she can develop into an adult whenever the timing and conditions suit, and therefore rather than have a single mass emergence event like its sexual cousin, Belgica antarctica on the Peninsula, E. murphyi can produce populations all through summer. In addition to this, they are tough, able to withstand the temperatures and annual freezing Signy endures, by rapidly cold hardening to dropping temperatures, tolerate drying out when the thin moss and soil layers lose water, but also respire times when they flood. The midge is flightless, having lost its wings some time ago – a response to the cold that is often seen at the Polar latitudes. So, it can only get about as wriggling larvae, as walking adults, or by catching a ride. Based on its current distribution range, and association with footpaths, it seems highly likely that it is Signy staff and visitors that spread this midge around on the treads of our boots, something we are trying to address in a revision of biosecurity protocols.

E. murphyi is ... doing the job of earthworms in an ecosystem that has never had such a creature.

Whilst harmless enough, E. murphyi is a detritovore, eating dead organic matter built up in the moss and peat banks. This is making the soil more ‘humous’ than usual in places where E. murphyi is present. In an ecosystem with no significant invertebrates to break down the litter, moss banks become peat and remain so for millennia. But E. murphyi can turn peat into soil and add nutrients to it in the form of its own guano. They are doing the job of earthworms in an ecosystem that has never had such a creature.

The impacts of the midge invasion are beginning to be realised: already they amount to more than 2.5 times the mass of the native invertebrate population and are having an unmistakable affect on litter turnover. Our recent work has started to explore the soil chemistry to find out how much these tiny bugs are influencing the ecosystem. As many of you may well know, Antarctica is a nutrient poor environment, and small changes may have consequences to the native vegetation. Mosses tend not to love rich soils, and Signy has some of the finest examples of moss banks and vegetation in the Antarctic.

this midge colony is capable of introducing as much nitrogen as the seals!

Whilst this all sounds very negative, take solace in the fact that because Signy is a basic ecosystem, we can learn a lot about the impacts of an invasive species from this accident. Understanding the linkages between species and un-weaving the webs created is the holy grail in ecosystem science. This is an unachievable feat in an ecosystem as complex as a rainforest, or even your own backgarden. But on Signy, life is simpler and we may be able to unpick the island’s functions by monitoring the effect this alien is having.

And now for a twist in the tale! I have set the scene with E. murphyi as the villain of the piece. But let me introduce another: the beetle Trechisibus antarcticus. This predatory beetle has been disrupting invertebrate life on E.murphyi’s native South Georgia, decimating populations of herbivorous beetles, and possibly E.murphyi itself. In fact, E. murphyi has not been seen on South Georgia in years. Could it be that another invasive species has wiped it out? Well, truth be told we do not know for sure, but if true the only population in existence would be the alien population on Signy Island – Do we then need to consider protecting it? Should we, in fact, conserve the aliens?!

INFOGRAPHIC: Introduction to an Antarctic Invader

A wonderful webinar, a Dippy talk and a trip to Belfast.